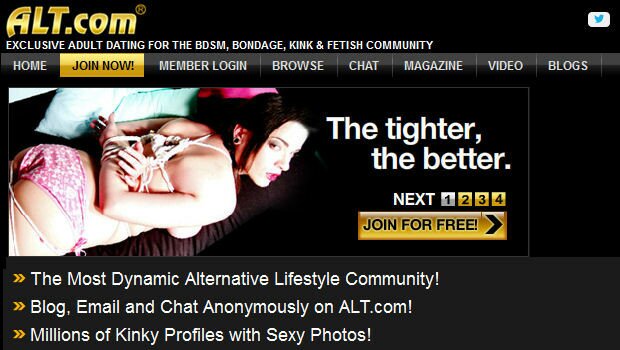 Summary: Alt.com is all about sex fetishes, fantasies and everything kinky. This alternative-culture has a thriving group of dedicated pervs who make day to day contact with one-another, role play, and get to act-out their perverse fantasies.

While none of us at adultmatefind are into anything outrageously kinky, we did feel it our professional duty to give Alt.com a thorough test drive – purely in the interest of our more “pervy” readers out there.

Just to warn you, I can say from experience that members on Alt.com range from mildly kinky, to downright perverse and weird.

Find-out What Turns You On

What we found is once you get in, it’s critical to find the subgroup that you fit into and stick with that.

Breaking into the Underground Alt Community

A lot of the activity at Alt.com is going on in the public chat areas. My advice is to start by getting registered within the groups that turn you on. Then you’ll have a feel for what’s going down before diving in head first so to speak into some “weird & freaky” subgroup.

[highlight bg=”#ffba00″ color=”#000000″]Scope the local groups •[/highlight] We had as much luck scoring, by checking-out the group areas on Alt as we did in the personal ads section. In the groups you get a good feel for what people are about without having to talk directly to them. Though you can strike up interesting connections here too if you go about it the right way (read on for more).

Is that my bank manager? • Most of the groups have a “regional wing”. If you’re not too shy, I suggest finding-out about stuff going on in your own local area. You might think your own fantasy is pretty weird, till heck you read these forums and find half your neighborhood is into it too! I swear I saw my pervy old bank manager dressed-up as a school girl – yep his red beard is a dead giveaway!

The good thing about this is that you can (if you’re the adventurous type) get into your local alternative scene – which could, unbeknown to you, be throbbing.

What we found is that if you’re reactive enough in the chat areas and really get to know people there there’s a good chance you’ll get invited to some kinky S&M parties, swinger nights, and other goings-on about your town.

Hooking up with women on Alt.com is ultimately about finding someone into your fetish – as most fetishes have their mirror- that’s half the battle.

Alt has the same rules as other hookup sites like Adult Friendfinder (which by the way has its own massive fetish community). You register in the first place at Alt.com with a no-cost freebie membership.

I’m not even going to review what the free account does. It’s so limited that it’s basically no more than a teaser. You can’t even view peoples’ photos, so as far as trying to contact anyone forget it.

Once you signup you need to upgrade more or less from the get-go because you can’t view, search or talk to people properly without it. Registration is secure and confidential.

We created our personal profiles diligently and adorned them with our best kinky photos as well as adding a respectable range of weird perversions (this is where it gets fun) – some of these were just fantasies, others were things which we’d done.

[highlight bg=”#ffba00″ color=”#000000″]What’s your fetish •[/highlight] It’s best to get really explicit and tell others what you are into from the start. Use the questionnaire, but if you’re into something really strange (for example balloon-love or some other weird object fetish) it’s best to explain this in your profile ad so you get the right kind of contacts.

Alt has a pretty good profile format where you can tick-off your exact thing against the shopping-list of common fetishes. But there isn’t room for everyone’s quirky obsessions – that’s where you’ll need to make use of your “Profile Bio” area. Here you can get creative.

Be unique • On Alt.com being unique is what gets you standing out. Unique is good on Alt – conventional is boring so don’t be modest.

Other sites call them Cupid settings; on Alt just to be different theirs is called “Love Dog”. To be fair, the options here are far more selective and specialized than on a lot of other sites.

You can choose exactly what your ideal partner’s sexual interests should be, as well as their level of experience and what role they like to play (dominant, submissive and so on).

Don’t want to be bothered by inexperienced newbies, only hardened kinksters? You get an option to choose the level of experience your man/woman/couple should have – can’t get better than that.

Find your “other half”

[highlight bg=”#ffba00″ color=”#000000″]Approach – Guys •[/highlight] Hooking up with women on Alt.com is ultimately about finding someone into your fetish – that’s half the battle. Many fetishes have their counterpart:

When you find that person it can be like magic. Once you find that fit and you get talking to them on their fetish, then you can literally have them “eating out your hand”… Just feed them their fantasy and see them panting.

Role playing • If you’re new to the game, learn how to role play effectively and do that for a while. That’s the key. What we found is that for a lot of people on Alt.com just talking and fantasizing about their fetish is the end game.

[highlight bg=”#ffba00″ color=”#000000″]Is it fantasy or reality? •[/highlight] Never assume you’re going to meet your sex buddy in real life and fulfill the fantasy. It may happen, but often times it may not. For many people, it’s just that – a fantasy. So that girl who keeps telling you she wants you to walk all over you with her 6-inch red high heels, you need to get a feel for if she’s a teaser or a go and do it for real kind of girl.

Alt.com is About Lifestyle

What we found is Alt.com is more than an adult personals site; it’s a lifestyle for a lot of people. It’s more than just finding a date and then quitting – it’s about being part of a large, but subversive underground culture. If it’s for you, the only way to find out is to sign-up and see.